The company previously warned its investment in Stories could contribute to slowing revenue growth during the second half of 2019. Third-quarter revenue grew by 32.9 percent year over year, breaking a 12-quarter streak of growth rates above 40 percent.

Revenue for the December quarter of $16.91 billion marks a year-over-year growth rate of 30.4 percent. 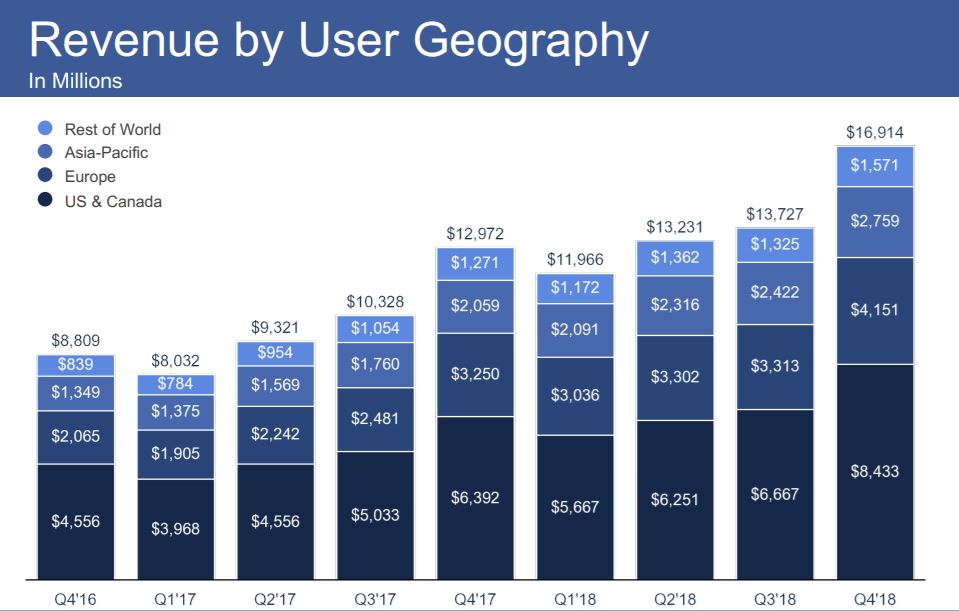 Facebook has been dumping cash into its long-form Instagram product called IGTV, its Craigslist competitor called Facebook Marketplace and its dedicated video tab called Facebook Watch. Zuckerberg said on the earnings call users spend an average of 20 minutes a day on the Watch tab. The company expects Watch to surpass 400 million monthly active users in 2019.

The company’s payments and other fees revenue, which includes online game purchases and peer-to-peer transactions on the platform, skyrocketed 46 percent quarter over quarter during the fourth quarter to $274 million.

Zuckerberg indicated the company will push further into commerce across its platforms, helping vendors advertise and sell to users.

“An increase in commerce on Instagram, Facebook and WhatsApp, I think is one of the most exciting product opportunities that we have in all of these products and a big business opportunity as well,” he said. “People are already doing a lot of commerce activity and are really interested in following brands, and I think making sure that that works and does well is a big deal. But I think there’s also a very big opportunity in basically enabling the transactions.”

The company is also upping investment in cybersecurity — in the wake of data scandals and content moderation flubs — adding to a projected spike in expenses.

It posted free cash flow of $3.32 billion for the fourth quarter, down from $4.15 billion during the third quarter and $5.05 billion in the year-ago quarter.