Historic swings in stocks this month have shaken many a bull’s faith in the market.

Not entirely so for Raymond James’ chief investment strategist Jeffrey Saut, who sees years left in this bull market. But that prediction comes with a caveat.

The S&P 500 hit a low of 666.79 in March 2009, the bottom that marked the beginning of this bull market. Since then, the index has rallied 272 percent. The S&P 500 briefly dipped into a bear market on Wednesday, down more than 20 percent from 52-week highs. However, it did not close at those lows, which would have marked the end of the bull market.

Though Saut is bullish on markets into the new year, there is one thing that could change his tune.

“We got a really thorough washout on the breadth of the market [in December]. If that low gets taken out, I’m going to have to rethink the bull case,” said Saut.

The Dow reached the year’s low of 21,713 on Dec. 26. It is currently a 6 percent drop from touching that level. That December low indicator signals a possible market downturn, if the late-year low on the Dow is followed by a lower low in the first quarter, Saut explained.

“That was conveyed to me by a guy named Lucien Hooper, who was a contributor to Forbes and worked for Thomson Mckinnon Securities, back in 1971,” said Saut. “If that December low is taken out to the downside in the first quarter of the new year, watch out.” 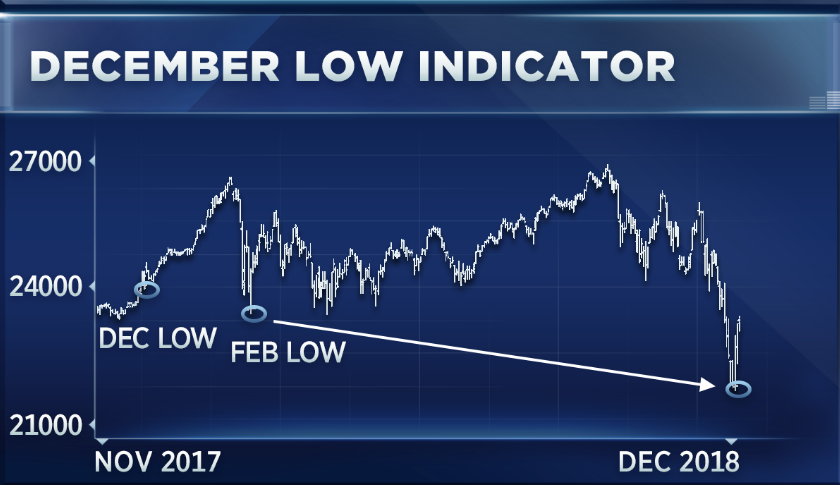 Absent a lower low in the first quarter, Saut believes the markets should power higher in 2019 to hit new highs thanks to healthy corporate profits.

“Earnings are going to continue to come in better than most people expect,” he said. “If the S&P is right on the bottom of the operating earnings estimate of $177 for 2019, depending on what kind of multiple you want to put on that, you see the S&P above 3000.”

A year-end target of 3,000 on the S&P 500 implies 21 percent upside from current levels. It would also mark a new record.