These stocks are up double digits from the markets December low

Don’t call it a comeback.

As the S&P 500 has rallied nearly 8 percent from its Christmas Eve low, and a number of big names in the index have soared double digits, and market experts have their eyes on two of those names for a bigger breakout.

Since the broad market closed at a low on Dec. 24, names like Kohl’s, Chipotle, Netflix, General Electric and Newfield Exploration have been among the biggest winners.

MKM Partners technician J.C. O’Hara says that of those names, Newfield is the stock to buy. It has surged a whopping 23 percent since Christmas Eve.

“I think the proper play is when you see an oversized correction within the market, your shopping list should consist of the most beaten-down names in the most beaten-down sectors,” O’Hara said Friday on CNBC’s “Trading Nation.” “So if you look at Newfield, [the stock] fits both categories.”

O’Hara referred to a chart of the natural gas exploration and production company to illustrate how the stock broke below a trading range of $22 to $46 per share. Given the magnitude of the sell-off, he believes the stock could rebound to the old support level of $22. He also believes that Newfield is extremely oversold, and that its oversold condition makes it a good name to buy.

“To put that in context, we have not seen that oversold level since 2008, and that’s when oil was trading at around $30 a barrel,” he said. 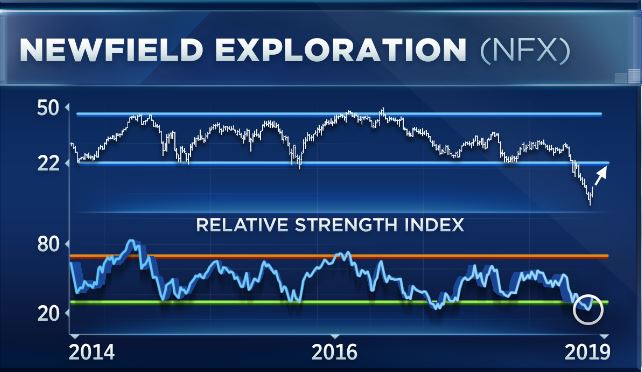 Strategic Wealth Partners CEO Mark Tepper is looking to the FANG trade as a place for growth. Tepper likes Netflix in particular, which is up 27 percent since Dec. 24.

“The thesis is still in place: People don’t want to pay for cable anymore, and Netflix is at the forefront of the cord-cutting movement,” Tepper said on “Trading Nation.” Despite Netflix’s steep fall from its high, the stock is still up 40 percent during the past year.

And while Tepper says that Netflix bears have been concerned about the valuation of the stock, he stresses that Netflix’s recurring revenue thanks to its loyal customers “commands a premium valuation.”

“So don’t be discouraged by the naysayers, this is a stock that you’re going to be happy with,” Tepper concluded.

Newfield and Netflix also started the year strong, rallying over 8 percent and 10 percent respectively in the first few trading days of 2019. In Monday’s future market, Newfield pointed to a 4.4 percent rise to $15.96, and Netflix was up 1.4 percent at $301.89.